What is a train station?


Before Craig got here, a friend of mine asked me what Craig and I would do. I listed the knowns: spend time introducing Craig to my new friends, go to the Lake District, go to Mossley and see Acorn's Antiques. I said there were unknowns, too.

My friend said, "I thought you'd just spend all week in bed."
I laughed. "Right," I said, "We're not really that sort of people."

In the ten short days that Craig was in Manchester, we did many things. Some might say too many. For example: on his fabulously rainy last day, we went to the Manchester Art Gallery. But no one could possibly question Station Stories.
...

Piccadilly train station is, perhaps, not quite at the centre of the city, but it is Manchester's main train station. Its current incarnation was built in the 60s, and as such, it is an enormous glass structure. In its own way, it can be beautiful. 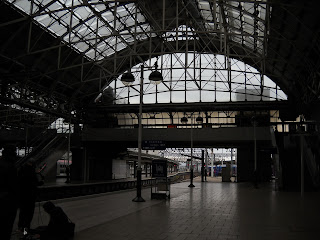 It is modern, with digital arrival and departure signs. 12 train platforms, as well as the Metrolink light rail platforms below. It is also a mall, housing Starbucks, Monsoon, TieRack, and the only Manchester branch of the enormous UK chain The Bagel Factory, which sells and promotes bagels as "America's best kept health secret!" Indicating, of course, a nearly complete misunderstanding of bagels, Americans, and more generally, perhaps more sadly, health.
...

But what is a train station? For the most part, I think, for most people, a train station is a waiting place. A place merely designed to take you from home to a place you want or need to be. It is a place you deal with, a place where you undergo sacrifice of time and pleasure, in order to get somewhere you would prefer to be. Or perhaps somewhere you have to be.

And for the most part, I think, for most people, not a lot happens in a train station. It is a waiting place. It is a getting from here to there place. It is just an in-between place.

Sure it is a shopping place, too. But only as a product of waiting. You wouldn't go to the train station to shop. You would shop there only because you had to wait there. It is a drinking and eating place, as well, but again. Only because of the waiting. **

Now imagine this:
Approximately 12 strangers stand on the mezzanine of Piccadilly Station, looking down at the ground floor. Imagine you are watching the amorphous crowd. You stand, watching, picking out individuals as they make their ways through the station. This one has an enormous backpack. Maybe she's on her way to the trip of a lifetime. Maybe she's just returned from it. Maybe, just maybe, you think, Manchester is part of it. 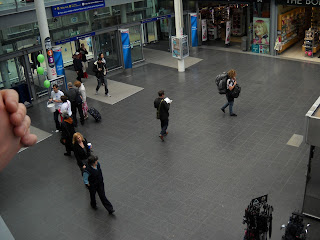 Now imagine this:
You and approximately 11 strangers are not only standing on a mezzanine and watching. You are all also wearing headphones, making you look, if anyone cared to look, like a group of very special people. 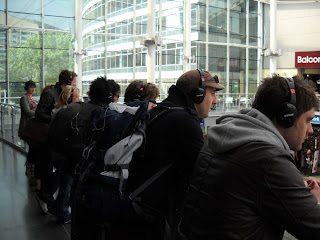 You hear him, but you do not see him. He is one of the crowd.
And because you cannot see him, he could be anyone. These thoughts, this story you're hearing, they could be anyone's. Because a train station is a waiting place, that makes it also, strangely sometimes, a thinking place. And any of these people you're watching could be thinking this. Something like this.

Eventually, if you pay attention, he makes himself known. He wanders through the crowd, speaking quietly into a wireless microphone, and though you are 50 feet away, you can hear him just as you could if he were in your bed, telling you everything he'd been through with that woman. It feels like he's talking to you.

Really, he's talking to you. And approximately 11 strangers.

He told us his story, about how she wrote him cards, and how he needed to get rid of them, now that she wasn't his any longer. He tries leaving them around the station these days, he says, but it's hard. People are always noticing, giving them back to him. "Hey, mate! You dropped this!"

And as in his story, so in real life. You and approximately 11 strangers are the only ones, you see, who know he's trying to drop these things. And you are unnoticed. You are 50 feet away. There are many people in this train station who are there merely to wait, and they do what people do. Mostly, they do not notice. They do not notice him dropping his love letters, and they do not notice approximately 12 strangers watching them, with headphones on. But some do notice.
"Hey mate," they say, in entirely good faith. "You dropped this!"

He takes the card back, and thanks them for noticing, and continues telling his story and drops the card again.

And you stand there on the mezzanine and listen to this private story unfold. You watch and hear this performance, performed for an intimate audience: only you and approximately 11 strangers.

David Gaffney, Nicholas Royle, and Jenn Ashworth were especially memorable, perhaps only because I had already heard of those writers. Or perhaps because I could, in some way, relate to the stories they told.

There was a very obscure sort of poetry by Tom Jenks that was difficult to hang onto because I could not read his words as he said them, and his words were sometimes tricks, as poems can sometimes be. There was a conspiracy tale about the Masons.

Their stories were live-mixed with music and sounds from around the train station. Very cool technology was used to transmit the live-mix to our headphones. 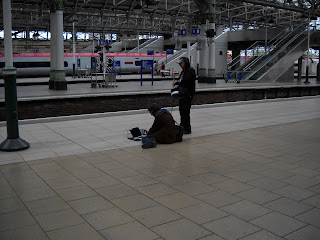 It was futuristic. No. It was the future. I think this because Station Stories, in a way, raised almost too many questions for it not to be the future.

Architectural questions.
For example:
What is a train station?
When you really start thinking about them, they are truly strange places. They are never fully closed, so there is never really an "inside." They have doors that demarcate inside and outside for people. But the doors for the trains are always open to the outside. Perhaps it makes sense for them to mix public and private like this, to be so ambiguous. 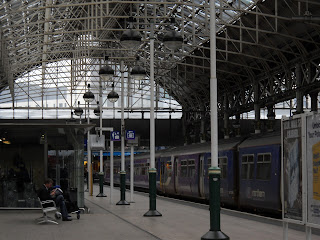 Dramatic questions.
For example:
What is a stage?
For Station Stories, the thoroughfares were the stage, sometimes. And sometimes the dead spaces of the station were the stage.

Ethical questions.
For example:
Is it ok to have people to unintentionally become part of a performance against their knowledge and/or will? Or where is the line between art and life, and are we allowed to find them and trample on them in this way? Are we not allowed? Who lays down those rules?

Anthropological questions.
For example:
What is a performance? And who are performers?
The writers, surely, were performing. Traditionally. But what of the strangers who didn't know what was going on, and yet still played by the special rules of the train station, by refusing to let a man drop a card and keep walking? What of them doing what was expected? What of the others who ignored the cards, who didn't notice the cards? What of them doing what was equally expected?

And more to the point and to the problem questions.
For example:
What of us?
Occasionally people pointed up at the mezzanine, alerting their family to our presence, laughed at the specials, or just looked confused in our direction. We looked back, sometimes. That, too, was that a performance?
....
Of course, individual lives and stories and trajectories are going on everywhere all the time. Only a solipsist could imagine otherwise.

But Station Stories made it art, made it high-tech, and because of the excellent writers, it was damn engaging, too. Craig said I had this face on the whole time: 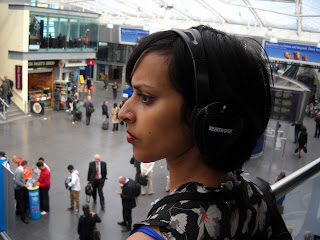 Which is too bad, because I feel like I look rather stern and unhappy in that picture. Just about angry.
"No," he said. "That's what you look like when you're thinking."

Oh, dear. I might need to stop thinking so much, if that's how I look, I said.
And he said something sweet, like he does, because he's that sort of person. It was, undoubtedly, loving. The kind of thing he says all the time that I forget quite easily. I'm that sort of person.
...
Two days later, we were back at Piccadilly, this time having a private story of our own in that very public space. He was leaving again, and this time I won't see him for probably a full year, unless we manage something magical. He probably did, but I can't remember if he told me this time that I look beautiful.

I don't remember the right things sometimes. I'm that sort of person.
....


**
This is a footnote, added mere hours after this post was published.

I have twice been in train stations when they became not waiting places.
The first:

Years ago in Atlanta, I was on my way to a protest against an abomination that is otherwise known as war. I was traveling on MARTA, which is an abomination in itself. I tell you what, it is not "Smarta."

Having cleverly deduced that a truly massive horde of protestors (maybe 30 people?) were using public transit to attend the protest (because, I suppose, we were holding placards and banners that said, sometimes, "No Blood for Oil"), the cops shut MARTA down to prevent us joining the massive horde that was already at the protest location. Which is to say, our combined might would have equalled that of... well, maybe 100 people. Protesting isn't that big in Atlanta. We were already on the train, and we were only a few stops away, but now we were locked in.

And someone started singing. Not some obvious protest song, not Woody Guthrie or Bob Dylan. Not Joe Hill. Oh, no. No, no.

Someone started singing, and we all joined in. I found myself, with maybe 50 other people, singing loud...

Take my hand, we'll make it, I swear!
O-oh! We're halfway there!
O-oh! Living on a prayer!

I present for your judging eyes, then, dear readers: Bon Jovi as a transformer of space.

The second:
Craig and I waited on the platform, just a few weeks ago,  for the train that would arrive and a few minutes later, take him away. We said our goodbyes, the train rolled in. And rather than him quietly taking his seat, we were overwhelmed by 100s of laughing, cheering, partying, screaming people streaming out of the train.

Man City had just won the FA cup. City fans made the train, the train station, the streets into a place of pride.... Craig's train left with him on it, and I followed the party into the train station and out of it, laughing and taking heart in the collective joy that filled the train station.
Posted by nijabird at 6/05/2011 05:52:00 PM